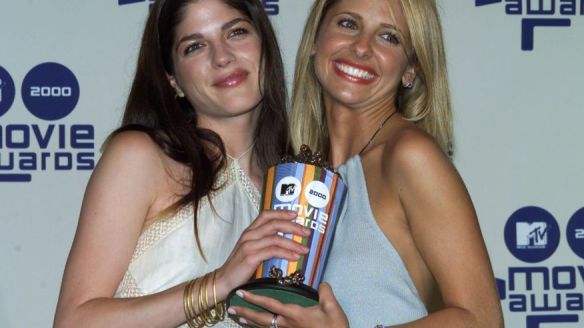 LOS ANGELES –  Selma Blair is all ready for a role in the “Cruel Intentions” TV remake.

“I think that’s wonderful,” she told FOX411 of the rumored TV reboot. “I think it’s a timeless story, and I think people love hearing about the adventures and misadventures of teenagers so I wish it well and I hope I can play a mother.”

Blair went on to tell us specifically which character she would want to play in the reboot.

“Christine Baranski played my mother, but I would like to play my mother,” she said at Brian Bowen Smith’s Metallic Life opening in Hollywood Thursday night. “I’d like to play Cecile Caldwell’s mother.”

However, Blair said she would only be interested in joining the cast again if they filmed in LA.

“I would be down, if it’s shooting in LA. I wonder if anything shoots in LA anymore because I have to be near my son.”

The 43-year-old actress’ 4-year-old son, Arthur, is a clear priority in her life. When asked what her favorite part of being a mom is, she shared that her son makes her do something that no one else can do.

“The incredible love I have for my son… when he… falls asleep near me I can’t stop smiling, and I’m not a smiler,” she confessed. “I love everything about him and I love that I have been able to devote the last four years being his mom pretty much solely and now it’s time to get back to work and that’s really hard.”

Currently, Blair is working with Ryan Murphy on his upcoming drama “American Crime Story.” She plays Kris Jenner in the story of the OJ Simpson trial.

Blair said she loves playing a motherly figure because she is focused on being a mom in real life.

“I’m on the Halloween four-year-old circuit,” she joked. “I used to go to Milan and Paris, and now I go to Studio City. My son is going to be a skeleton or a police officer or some type of zombie or all of them because kids go to a lot of parties. I think I will be a nun because… it’s comfy. It’s like wearing a snuggie.”